How does Verapamil Work?

How Does Verapamil Work? 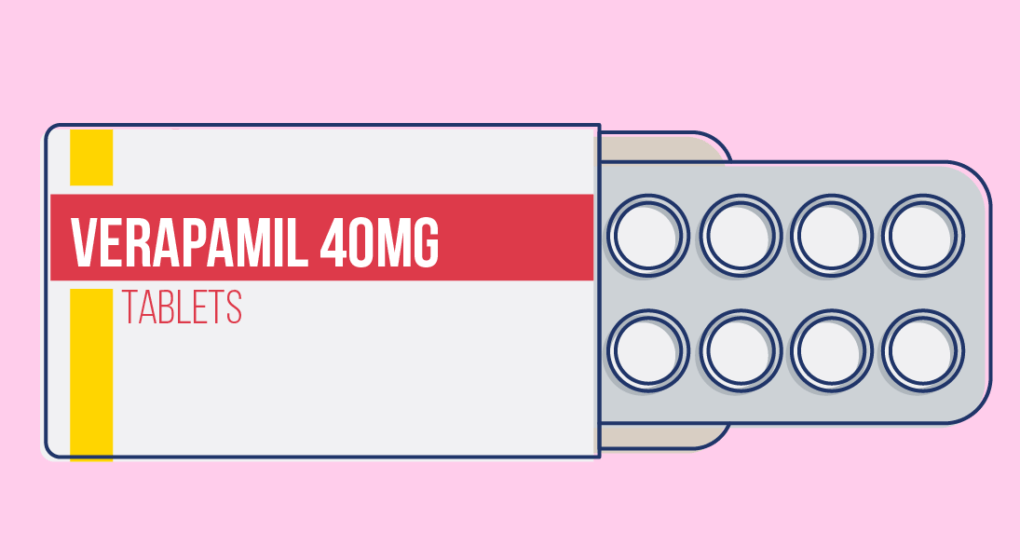 Verapamil is a type of drug called a phenylalkylamine calcium channel blocker, which can help to reduce blood pressure in a number of ways. As it blocks the calcium channels in the body, the smooth muscles surrounding the blood vessels relax and allow the vessels to expand and the blood to pass through more easily. Unlike other drugs in the same class, verapamil also reduces the contractility of the heart, meaning that the heart rate and the volume of blood pumped around the body go down.

If you or someone you know is taking verapamil and you’d like to know more about how it works, this page should have most of the information that you might need.

Verapamil is the generic name, which is the name of the actual drug inside your medication. You might know it better by one of the brand names, though, which are:

Each of these medications contains verapamil and work in the same way, but have different names according to which company they are made by. There are a couple of differences in the way they are formulated that affect the way they work, though, so let’s take a closer look.

Anpec and Isoptin both contain standard doses of verapamil in 40mg, 80 mg or 120 mg tablets. The body is quite quick at breaking down the medication and excretes half of it from your body within 4 hours, which is why you usually need to take 3 doses per day with these brands.

Isoptin SR, Cardilox SR and Veracaps SR are what we call “controlled release” medications, that slowly release the medication into your body over a longer period of time. These brands come in slightly higher doses with 160 mg, 180 mg or 240 mg, but is released more slowly so that you only need to take one capsule each day.

Tarka is in a category of its own because it contains both verapamil (180 mg or 240 mg) with trandolapril (2 mg or 4 mg) in one controlled release capsule that can be taken once per day.

Verapamil is a special type of drug in this class and works slightly differently to the others. All of them block calcium channels in the body, which stops the muscles from tightening around the blood vessels and increasing the blood pressure, but verapamil also has an effect directly on the heart to reduce the volume of blood pumped around the body.

You might have been told to take verapamil for a number of reasons. For example, it can help to manage all of these health conditions:

Calcium is very important in the body and is needed to allow particular muscles to contract, such as the smooth muscles in your heart and that surround your blood vessels. You don’t have any conscious control over these muscles; they do all the work on their own without you needing to think about it.

Verapamil works by blocking the passage of calcium into the cells that need to contract. When these happens, the cells can’t work as usually and the muscle becomes more relaxed.

This relaxation of the muscles is exactly how the drug works. When it changes the contractibility of the muscles in the heart, the heart contracts less often and less powerfully, meaning you heart rate drops and the volume of blood pumped around the body decreases.

This is very useful for someone who has a fast or irregular heartbeat, which is why verapamil works well to treat these conditions. It can also help to decrease the blood pressure if you have hypertension because the muscles around the blood vessels relax, allowing the blood to flow through more easily.

The most common side effects of verapamil happen because the drug is working too well and you end up with low blood pressure. Signs this include:

It is common to experience these signs when you first start taking verapamil, and they should go away on their own as your body gets used to the drug. If you still notice them after about a week, it is likely that the dose of verapamil is too high and it is best for you to discuss this with you doctor, who will help you to find the right dose.

Verapamil can also sometimes cause retention of fluid in your body, making your ankles appear swollen. This is called oedema and usually means the amlodipine dose is too high – if you notice this, it’s best that you discuss your symptoms with your doctor as soon as possible.

Some people who take verapamil also become constipated and have difficulty maintaining regular bowel movements. For a full list of side effects, please check the information leaflet included with your medication.

Verapamil is not always the best choice of drug and there are some cases when it should not be used. For example, it can worsen the function of the ventricles of the heart for people with heart failure. Also, because it works by reducing the heart rate, it is not a good option for people that already have a  low heart rate, known as bradycardia.

It is supposed to be taken long-term and if you stop taking it suddenly, the smooth muscles in your heart and around your blood vessels will suddenly be able to contract again and will tighten, causing more problems than in the begin because of the sudden change. Instead, it is best to gradually reduce the dose over time to allow your body time to readjust.

You might also find that verapamil affects your mental coordination and you feel more tired than usual. If this happens to you, avoid driving or operating heavy machinery as the consequences if you lose concentration can be severe.

When you take verapamil together with other drugs the way they work can interact, changing their effect on your body. Drug interactions involving verapamil include:

Beta blockers and verapamil both lead to a drop in heart rate. They can lead to dangerously low heartbeat if used together, known as bradycardia. This should only be used under specialist supervision.

Verapamil increases the concentration of buspirone, leading to a higher risk of adverse effects. This can be managed by lowering the dose of buspirone.

Verapamil increases the concentration of carbamazepine, leading to a higher risk of adverse effects. This can be managed by monitoring for side effects and lowering the dose of carbamazepine if needed.

Verapamil increases the concentration of colchicine, leading to a higher risk of toxicity. The combination should be avoided, if possible, or a lower dose fo colchicine should be used.

Verapamil increases the concentration of cyclosporin, leading to a higher risk of adverse effects. This can be managed by lowering the dose of cyclosporine.

Verapamil increases the concentration of dabigatran, leading to a higher risk of bleeding. This is not recommended in some cases but can sometimes be managed by lowering the dose of dabigatran.

Verapamil increases the concentration of digoxin, and both drugs work by lowering the heart rate, leading to a higher risk of bradycardia. Heart rate should be closely monitored and the dose of digoxin decreased, if needed.

Verapamil increases the concentration of eletriptan, leading to a higher risk of ischaemia. Use with caution

Verapamil increases the concentration of eplerenone, leading to a higher risk of adverse effects such as hyperkalaemia. This can be managed by lowering the dose of eplerenone.

Verapamil increases the concentration of buspirone, leading to a higher risk of toxicity. If possible, this combination should be avoided.

Verapamil should be avoided if you are pregnant or planning to become pregnant soon. This is because it could cause maternal hypotension, leading to insufficient oxygen supply to your baby.

There is not much evidence to support the safe use of verapamil when breastfeeding, so it is not usually recommended to avoid any potential risk to your baby. 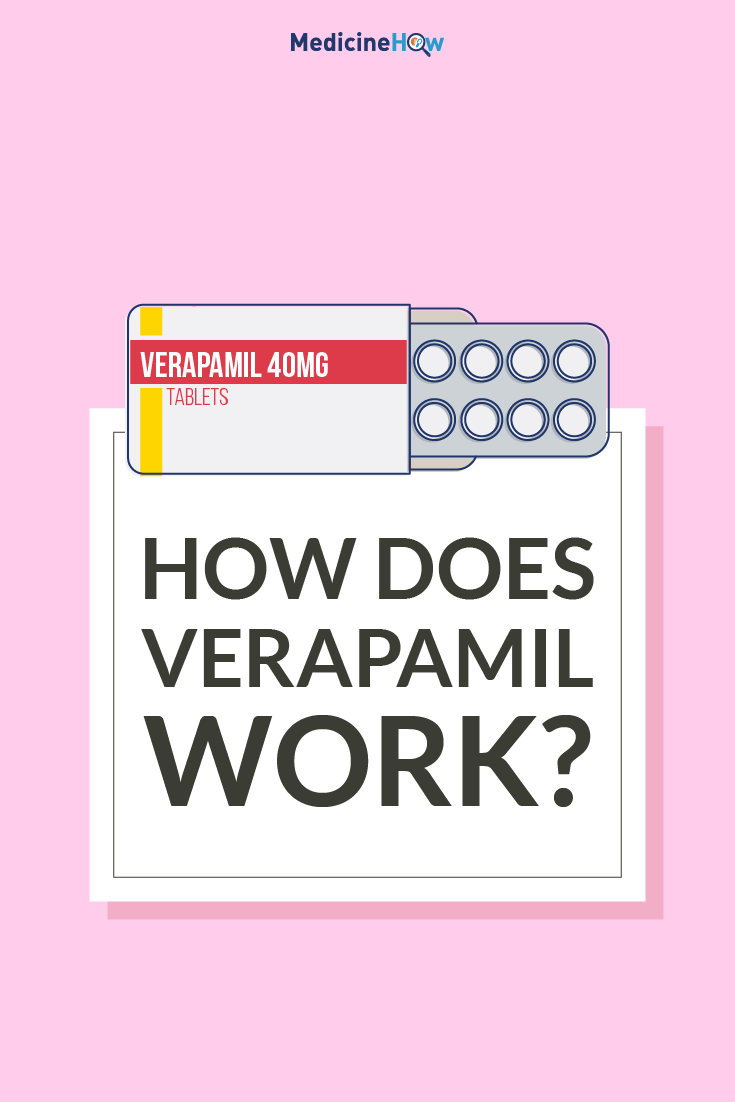 How does Diltiazem work?

How does Nimodipine work?

How Does Nifedipine Work?