How Does Celecoxib Work? - MedicineHow

How Does Celecoxib Work? 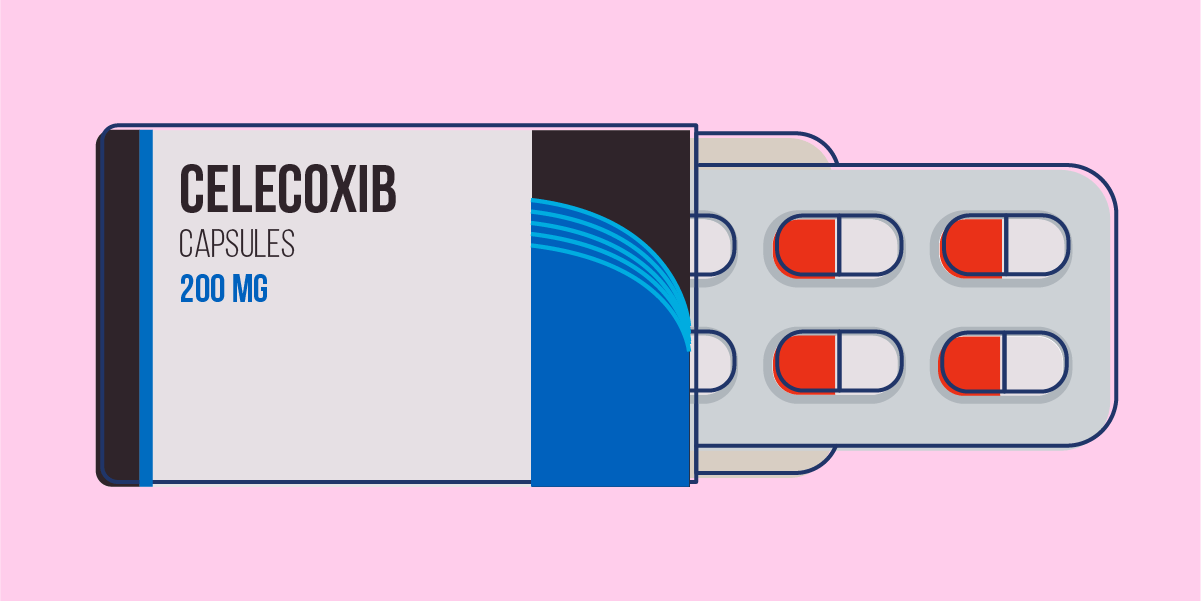 Celecoxib is a type of drug called a non-steroidal anti-inflammatory drug (NSAID). It works by stopping the production of compounds called prostaglandins in the body. Prostaglandins have a number of effects on your body, including causing inflammation.

Therefore, celecoxib can help to reduce pain and inflammation by stopping the production of prostaglandins. This is which it is usually used to relieve painful inflammatory conditions, such as arthritis.

Celecoxib is available as capsules to be swallowed. You may also know it as Celebrex, which is the brand name of the medication that contains celecoxib.

There are currently two different doses of Celebrex available: 100 mg and 200 mg. The usual maximum daily dose of celecoxib is 200 mg/day, although women may take up to 400 mg on the first day only for period pain.

Celecoxib is a type of drug known as a non-steroidal anti-inflammatory drug (NSAID), which is a group of drugs that all work in a similar way. Other examples of NSAIDs include:

Celecoxib is a special type of NSAID, which we call a COX-2 selective NSAID. This is because it specifically blocks COX-2 (and not COX-1), which helps to reduce pain and inflammation with a lower risk of side effects.

It also has a relatively long half-life, which means that stays in your body for a longer time after taking a dose. As a result, you can take a dose less often than for other NSAIDs, such as once or twice a day.

What is Celecoxib used for?

Celecoxib can be used to help relieve symptoms of pain and inflammation caused by a variety of health conditions. Your doctor may recommend it for:

Celecoxib works by inhibiting COX-2, which is needed to produce prostaglandins in your body.

You have many different types of prostaglandins in your body, and there are some in almost every tissue. They each have different effects on your body, such as to cause your blood vessels to relax and widen, the platelets in your blood to come together to form a clot, or the tissues in your body to become inflamed.

Unlike other general NSAIDs that block both COX-1 and COX-2, celecoxib specifically blocks the action of COX-2. Inflammation is mostly caused by the prostaglandins that produced with the help of COX-2. Therefore, celecoxib has a more targeted effect to reduce pain and inflammation, with fewer side effects from the COX-1 related prostaglandins, such as blood clotting and hypertension.

Even though Celecoxib has a more targeted effect than other NSAIDs, you may still experience some side effects. These may include:

This is not a complete list of side effects, but just some of the most common. Please see the Celecoxib information leaflet for more detailed information.

Celecoxib can interact with many other medications when they are used in together, including:

There are some people who may need to avoid using celecoxib, or use it with caution, because they may be at risk of side effects due to the medication.

If it is used, a combination with a medication to help prevent gastrointestinal problems, such as esomeprazole or pantoprazole, is recommended.

Celecoxib may increase the risk of bleeding or thrombosis because the antiplatelet effect of the prostaglandins may be reduced. This is less likely with Celecoxib than other NSAIDS, although it can still occur.

Celecoxib may cause retention of sodium and fluid in the body, which can make hypertension and heart failure worse.It should not be used if you have heart failure, angina, peripheral artery disease or cerebrovascular disease.

Celecoxib may increase the risk of bronchospasm and cause symptoms of asthma to worsen. Some people with asthma can use them without any problems, but it is best to use a low dose and watch for signs of worsening asthma if you are using it for the first time.

Celecoxib may cause symptoms of inflammatory bowel disease to get worse.

Celecoxib can cause renal impairment is some people, particularly when used in combination with some other medications. If you already have some renal impairment, an NSAID may not be the best choice for you.

Celecoxib is not usually recommended for women who are pregnant or trying to conceive. This is because it can interfere with fertility and the development of the fetus.

For women planning to become pregnant, it can prevent or delay ovulation, so that the woman is less likely to conceive. Additionally, using celecoxib during pregnancy, particularly at the time of conception, is linked to a higher risk of miscarriage. It may also cause other problems later on in the pregnancy and should be avoided.

For women who are breastfeeding, celecoxib is considered safe to use.