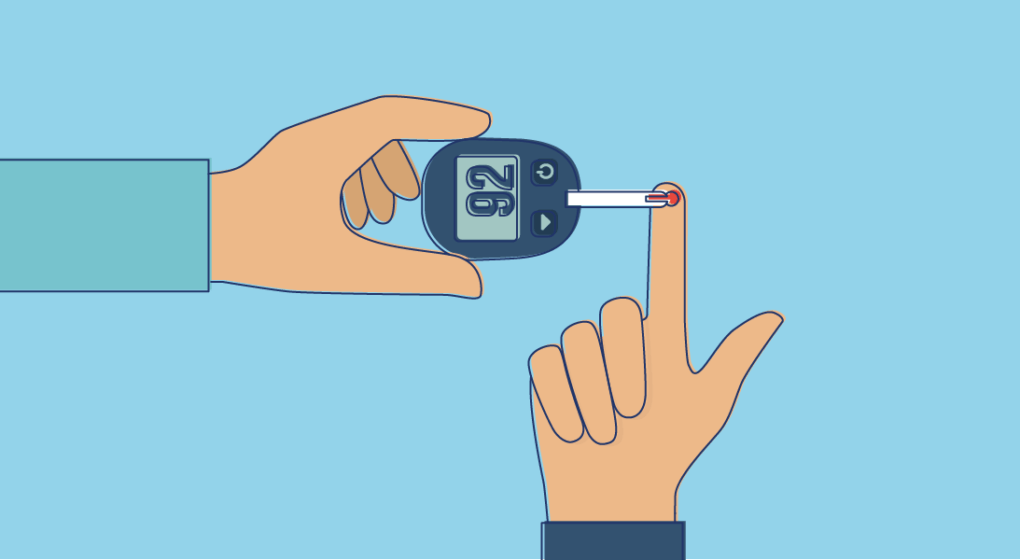 Put simply, diabetes is a disease that leads to symptoms due to ineffective insulin in the body. In this All About Diabetes series, we’re already covered how the body usually controls the glucose in the blood, so we know that insufficient insulin will probably result in high levels of glucose in the blood, also known as high blood sugar.

Let’s take another look at the diagram we used to look at blood sugar regulation.


As you can see, insulin is right in the middle and plays a very important part in reducing the blood sugar when it is too high. It does this by storing the glucose in the liver and allowing it to be used as energy by muscles and fat.

Therefore, if the insulin isn’t functioning as it should be, our body isn’t going to be able to control our blood sugar sufficiently. If it is too high, the body will be unable to balance it back out as it usually does, so it will remain too high.

This is a concern because too much glucose in our blood can cause serious problems for our health – in the short term but more importantly over long periods of time. These effects and why they occur will be covered later on in this series.

How we get to this point, where the insulin is not able to balance the body’s blood sugar properly can happen in a couple of different ways. It is for this reason that we categorise diabetes as Type 1 and Type 2 (there are also other types, such as gestational diabetes, but we will be focusing on these two for now).

In a nutshell, Type 1 is when there are problems with the production of insulin, whereas Type 2 is when the insulin is there but it doesn’t work properly. But let’s go a little bit deeper to get a better understanding.

What is Type 1 Diabetes?

Insulin is made in the pancreas and sometimes the cells that make it are destroyed and can longer produce insulin like they used to. This means that there will only be small amounts of insulin, or none at all, in the body.

The pancreatic cells are destroyed by an autoimmune response, which means that it is the body itself that destroys them. One day, seemingly out of the blue, the body recognizes the cells as a foreign part of the body and tries to eliminate them – a process that happen rather rapidly over a few weeks. Then things turn a little pear shaped for our insulin levels and blood sugar control.

Unfortunately, medical research to date has not been able to discover why this autoimmune response begins. We also haven’t figured out whether it is possible to repair the cells and return the cells to normal function.

What does this mean for us?

There is little we can do to prevent Type 1 diabetes and we’re at a loss of ideas about a cure. Instead, at the present we can only hope not to get Type 1 Diabetes, and if you do, manage it with medications for the rest of your life. It’s not difficult, but it’s a long-term thing.

Type 1 diabetes is the less common of the two types  – about 1 in 10 people with diabetes. Type 2 diabetes, on the other hand, accounts for the remaining vast majority.

What is Type 2 Diabetes?

Type 2 diabetes is a completely different scenario. The pancreas is functioning just as it should be. There is enough insulin in the body circulating its way around the bloodstream.

So there’s no problem, right? Unfortunately, that is hardly the case.

The issue here is that the insulin doesn’t work properly. It’s there. We can detect it in the blood stream. But, for one reason or another, it doesn’t affect the levels of glucose in our blood as well as it usually does.

As a result, even though we have insulin in our body, we still have high blood glucose levels.

The pancreas tries to make up for this by making more insulin, meaning we have even more than usual, but it gets to a point where the pancreas simply cannot meet the demands of the body to control the blood sugar levels. This takes a lot longer than the development of Type 1 diabetes and can take months or years – some even never progress to actual Type 2 diabetes as they make lifestyle changes to slow the process to a stop (more on the later in the series).

Why does the insulin stop working?

The muscle, fat and liver cells become resistant to the insulin. Given the strong link between obesity and Type 2 Diabetes (80% of people with the disease are overweight: read here), it is likely that this is at least in part to blame, with theories that the excess fat “blocks” the insulin from working properly.

Insulin: The Key to Glucose Control

I can’t take the credit for this commonly used analogy about insulin in diabetes control, but I think it is a useful so would like to share it with you.

The idea is that insulin is the key to letting the glucose into the cells to be used as energy.

Normally, the insulin key unlocks the door to the cells, letting the glucose in.

In Type 1 Diabetes, the keys aren’t there. No keys; locked door. Blood glucose remains in the blood at high levels.

In Type 2 Diabetes, the keys are there in abundance. The problem is that the key doesn’t fit the lock anymore, possibly due to fatty tissues blocking the “keyhole”. Once again, the door remains locked and the blood sugar soars.

This diagram sums it up nicely. 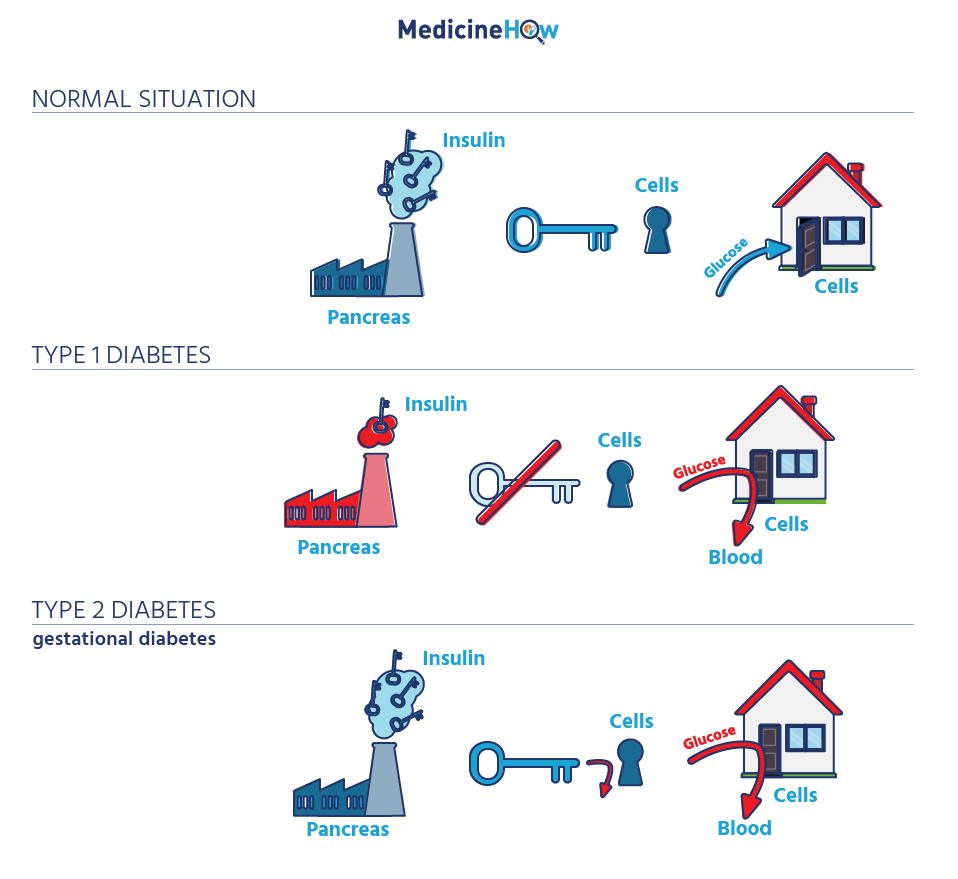 And so there we have a brief overview of what exactly diabetes is and how it comes to be. In the next post, we will be going deeper into why we need to treat diabetes. Why is having high blood sugar such a big deal?

This is the second post in the All About Diabetes series. The last post in the series was about blood sugar control in the body and next up we have Why We Need Treatment. 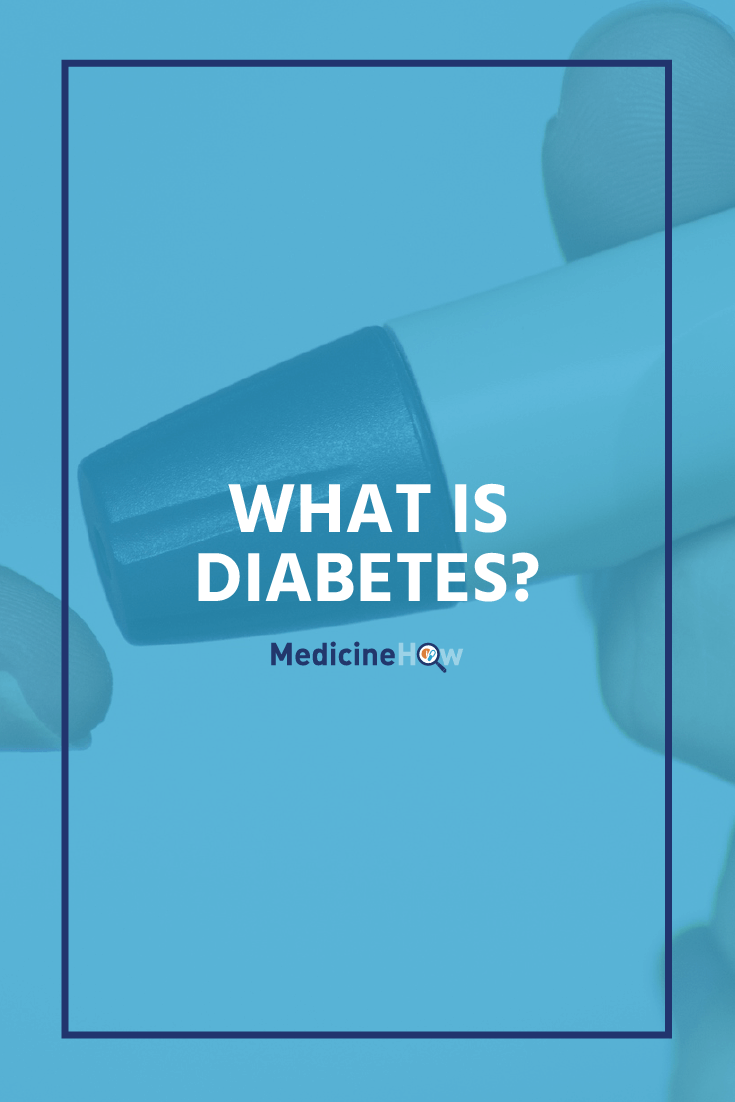 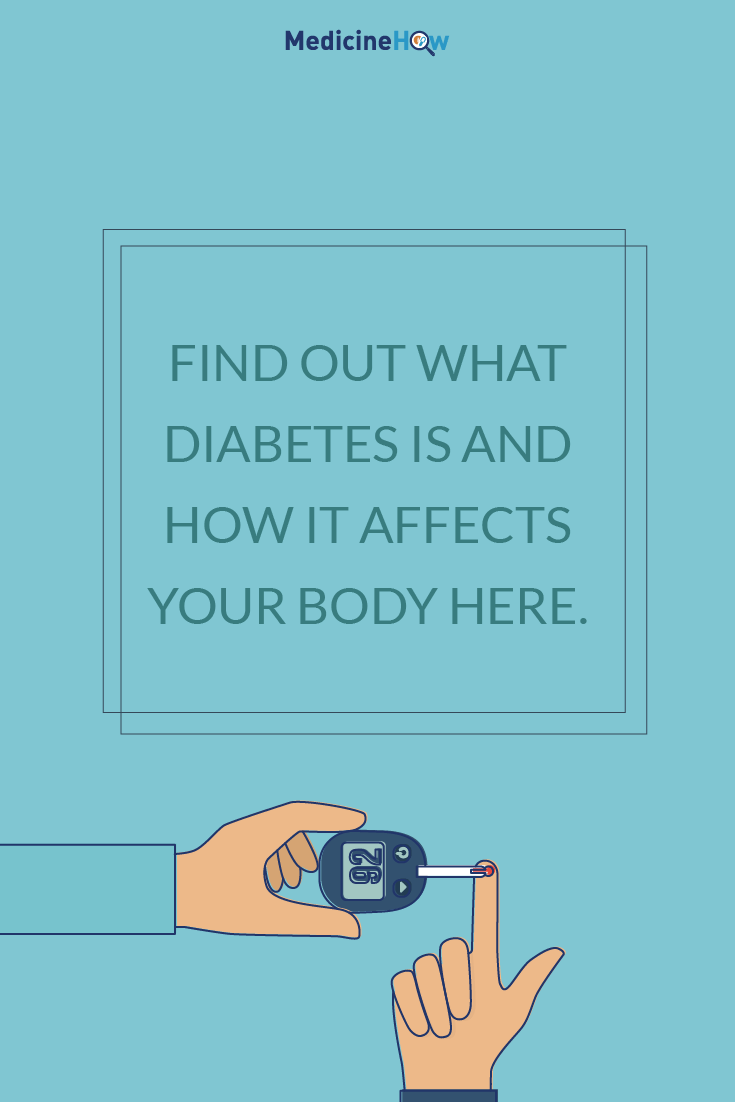 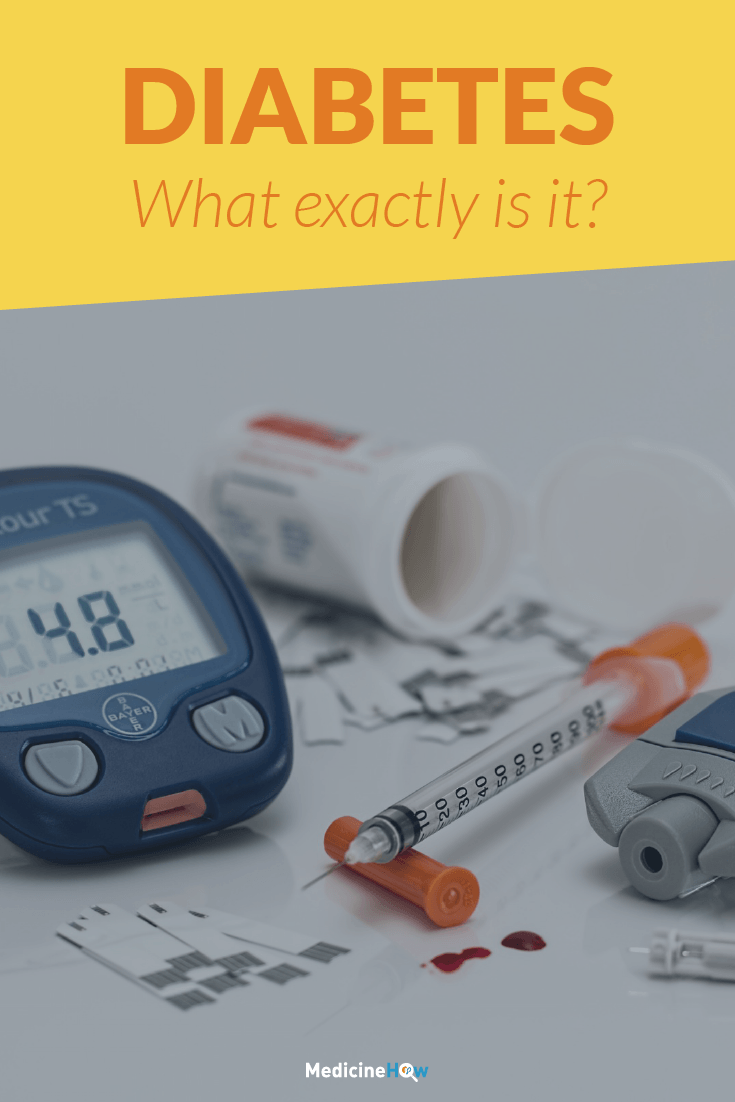